I was recently asked by EpicTV if I could review a pair of climbing shoes. Late one night, I met with EpicTV presenter, Matt, on a dark street corner and the exchange was made. In the half light, I slid the lid off the box to have a look only to have my face illuminated in green light as if it were a suitcase filled with gold (albeit green gold). With the shoes safely in my custody, I scuttled back to the outskirts of Chamonix, which I have come to call home. 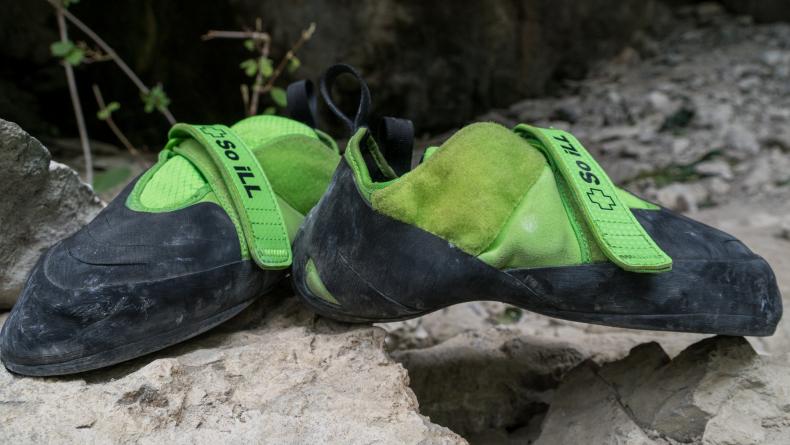 The next day I was keen to run them through their paces. I decided to have a look on the So iLL (I think pronounced 'soil'?) website, to see what they have to say about the Free Range shoes. After a few minutes reading about being inspired by retro sneakers and watching softly focused videos set to post-rock backing tracks, one thing became acutely apparent; these are shoes for hipsters. Enraged by the infiltration of modern culture and style into my beloved sport, I spat out my mouthful of artisanal coffee and hopped on my fixie bike to go show those punks what for at the local bouldering gym.

The rubber was originally developed for the Navy Seals

Taking the Free Ranges out of the bag, they definitely attracted some attention. The bright green styling is certainly hard to miss, and I was asked a few times about the make of the shoe. 'So iLL? Cool duuuude' was often the response of doubtful onlookers. None the less, I slipped them on to find out how they perform. First impressions were surprisingly pleasing. As someone used to wearing aggressive shoes, they felt comfortable and secure, if a little stiffer than I was used to. Another surprise was the rubber. The Dark Matter rubber is really sticky, almost tacky when box fresh, allowing me to keep my feet on some steep moves that should really have warranted more core strength than I posses. So iLL proudly note that the rubber was originally developed for the Navy Seals and is of a 'military grade', (not sure the special forces would approve of the stealth factor of these). Finally, the stiffness and sharp edges of the toe box made for a pleasant change. For a shoe that, at first impressions, seems to be marketed at someone who spends most of their time looking up at florescent holds from vibrantly coloured matting, the shoes' toe shape and stiffness felt like it would perform, better on the tiny sharp edges and crystals more commonly found in real stone. This required further investigation. 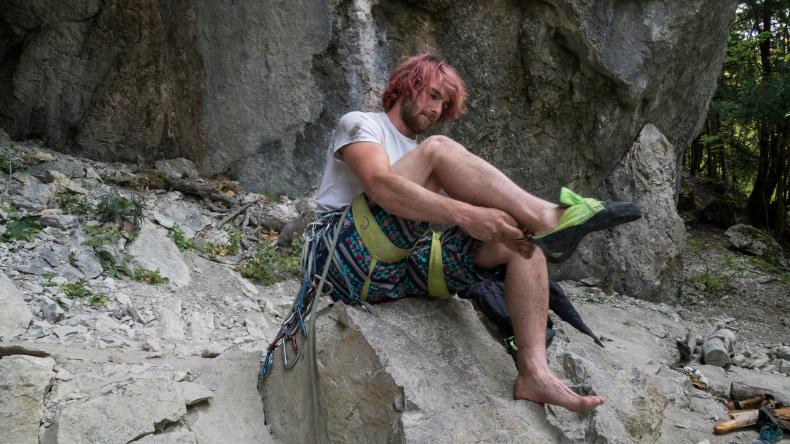 Later that week, with the new shoes in tow, I directed Matt thought the twists and turns of the alpine back roads on our way to Le Suet (to go try the project maaaan). A short steep limestone protrusion, just close enough to the car park, Suet boasts a selection of varied but high quality climbing. One route in particular had caught my eye and I was eager to see how the new shoes would perform. On the steep limestone, the shoes felt really solid. within a weeks use, they felt as comfortable as any other aggressive shoe I'd used before (mostly fiveTen Dragons). The stiff edges really bite down on anything sharp, and while they don't smear quite as comfortably as a softer shoe, the extra stick of the rubber lets you get away with quite a lot. One thing I did notice, whilst once again whipping off several clips before the chains, was the amount the rubber had been cut up by the limestone. One of the inevitable downsides to using softer rubber is a reduced life. I can't yet comment as to how long they will last, but So ill haven't scrimped on the thickness of the rubber under your feet, so they may well still last some time yet. 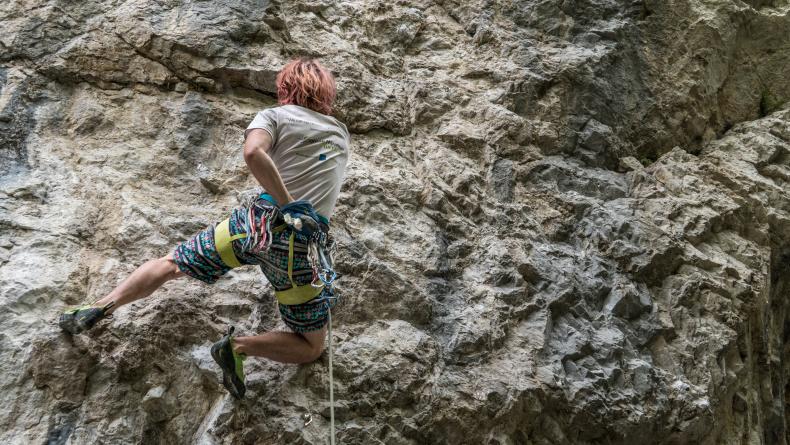 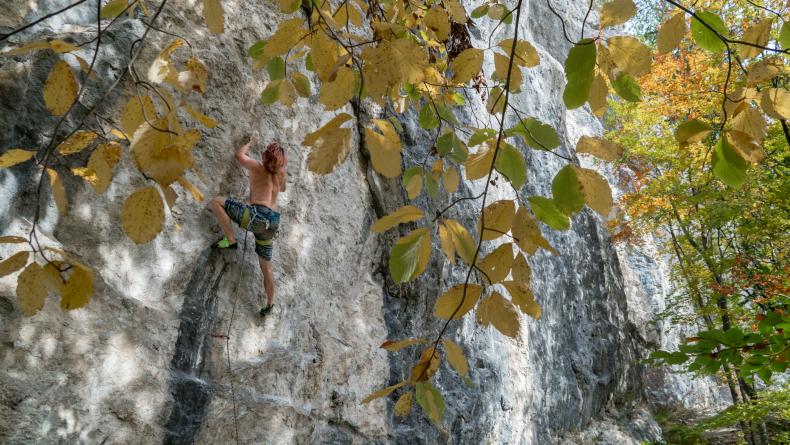 A few weeks had passed when I got asked if I wanted to bunk off work early and head up to the Plan des Aiguilles for a bouldering session with the small, yet dedicated, Chamonix bouldering crew. By now I'd gotten quite used to the Free Ranges and was surprised to find myself sticking up for them when, as before, I received a mild heckling for bringing dazzlingly green shoes to the crag. On the granite, a slight lack of feedback from the shoe, owing to its stiffness, was a bit of a problem when trying to find footholds with my feet, but blind faith in them sticking seemed to work most of the time instead. I left wishing my fingers were made of something stickier, and less prone to pissing blood. 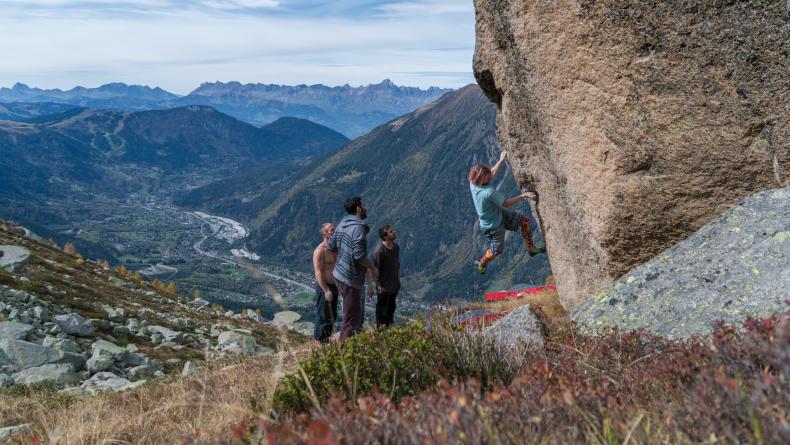 I am stoic believer in function over form when it comes to climbing kit and my initial reaction when I saw these shoes was that they were a fancy posing pouch for people with sleeve tattoos to mince about in at the gym, complaining about the conditions being too humid for the 'send'. I thought I would pull them apart, figuratively and literally, but as I write this they are still my go to shoe for anything over vertical outside the gym. I do still have some gripes about the shoes, I think the tongue material feels cheap and for a shoe priced at the top of the market and I haven't personally found any benefit to being able to close the velcro strap forward unless you want the heel to pull out all the time. However, with the strap pulled back in the normal position, the Free Range shoes performed as well as any thing I've worn before and I can't say I've encountered anything with stickier rubber. The aesthetics might not be up my street but like I said, function comes first and if function comes in form of flashy green sneakers, then so be it. 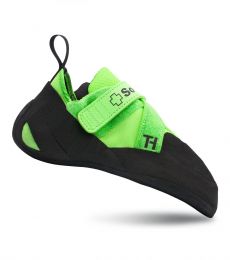